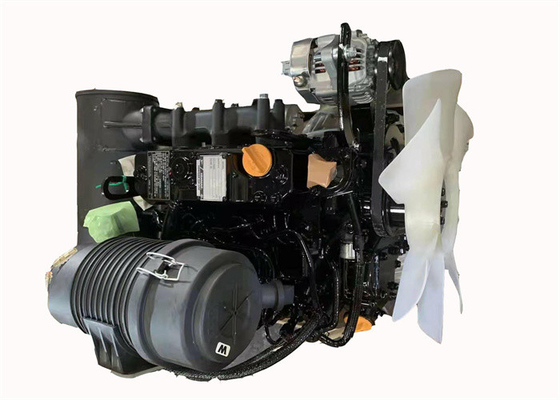 Parts of a diesel engine

The block is the backbone of the engine. It is a large block of metal, usually aluminum or steel, with holes cut into it for the cylinders.

The cylinders of an engine are where the work is done. Fuel is injected into the cylinders, where it is ignited by squeezing the diesel and air together making an explosion. This explosion moves the pistons, doing work, allowing the vehicle to move forward.

Pistons are devices that slide up and down inside the cylinders. Their job is to slide in and out, connected to the crankshaft, in order to compress the air injected to the chamber—this causes the air to heat up. The volume of air that enters the chamber is compressed about 14-25 times its original volume.

A camshaft is a device that manages the timing of the engine. A camshaft's job is to regulate when fuel is let into the engine, and when exhaust is let out. This seemingly simple job can have a great effect on the performance of the engine.

The purpose of a fuel injector is to atomize the fuel. This means to turn the liquid fuel into a mist, which drastically increases its surface area. This allows the fuel to combust more quickly, giving greater impulse to the piston. Fuel injectors are an improvement over carburetors because they are lower maintenance, and atomize the fuel better. Fuel injection allows for higher engine efficiency, which can lead to more power, and better gas mileage.

The crankshaft is the most important part of the engine because it connects the parts together, and allows the engine to create power. Its purpose is to turn the linear (up and down) motion of the pistons into rotational motion. One end of the crankshaft is attached to the camshaft, via a timing belt. The other end is connected to the flywheel, which regulates the power coming out of the engine, sort of like a surge protector for your computer.