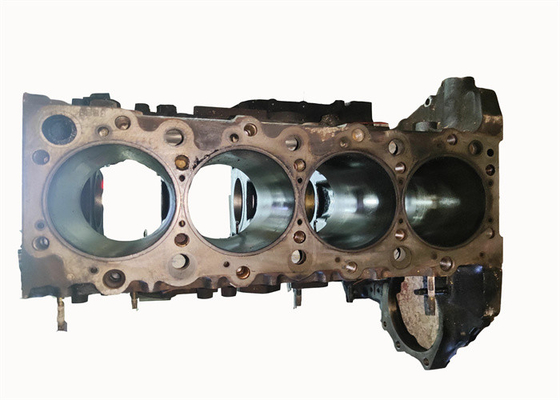 The engine block is also known as a cylinder block, which contains all of the major components that make up the bottom end of a motor. This is where the crankshaft spins, and the pistons move up and down in the cylinder bores, fired by the fuel combusting. On some engine designs, it also holds the camshaft.

Related: What is a Crankshaft?

Usually made from an aluminum alloy on modern cars, older vehicles, and trucks it was commonly cast iron. Its metal construction gives it strength and the ability to transmit heat from the combustion processes to the integral cooling system in an efficient manner. Aluminum blocks typically have an iron sleeve pressed into them for the piston bores, or a special hard plating applied to the bores after machining.

The block was originally just a block of metal holding the cylinder bores, the water-cooling jacket, oil passages, and the crankcase. This water jacket, as it’s sometimes known, is an empty system of passages, circulating coolant in the engine block. The water jacket surrounds the engine’s cylinders, of which there are usually four, six, or eight, and which contain the pistons.

Air-cooled motors, like the old VW flat-four, and the original Porsche 911 sports car motor, don’t really have an engine block. Much like a motorcycle motor, the crankshaft spins in engine cases, bolted together. Bolted to these are separate finned cylinder “jugs”, in which the pistons go up and down.