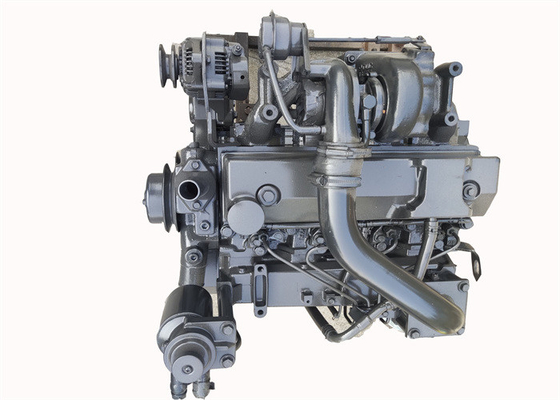 How Does A Diesel Engine Turn Fuel Into Power?

Four-Stroke Engines:
Like a gasoline engine, a diesel engine normally works by repeating a cycle of four stages or strokes during which the piston moves up and down twice during the cycle (in other words, the crankshaft rotates twice).

Intake: Air is drawn into the cylinder through the open green air intake valve on the right as the piston moves down.

Compression: The intake valve closes, the piston moves up, compressing and heating the air mixture. Fuel (dark blue) is injected into the hot gas through the central fuel injection valve and ignites spontaneously. Unlike a petrol engine, no spark plug is required for this.

Power: As the air-fuel mixture ignites and burns, it pushes the piston down and drives the crankshaft, which sends power to the wheels.
Exhaust: The green exhaust valve on the left opens to release the exhaust gases expelled by the returning piston.

Advantages Of A Diesel Engine

The diesel engine is much more efficient and preferable as compared with gasoline engine due to the following reasons:

They are more rugged and reliable

There is no sparking as the fuel auto-ignites. The absence of spark-plugs or spark wires lowers maintenance costs
Fuel cost per Kilowatt produced is thirty to fifty percent lower than that of gas engines

Diesels get great mileage. They typically deliver 25 to 30 percent better fuel economy than similarly performing gasoline engines.
Diesel fuel is one of the most efficient and energy dense fuels available today. Because it contains more usable energy than gasoline, it delivers better fuel economy.

Diesel engines are built to withstand the rigors of higher compression. Consequently, they usually last much longer than gas-powered vehicles before they require major repairs.

Disadvantages Of A Diesel Engine

Although diesel fuel used to be cheaper than gasoline, it now often costs the same amount or more.

Although diesel fuel is considered to be more efficient because it converts heat into energy rather than sending the heat out the tailpipe as gas-powered vehicles do, it doesn’t result in flashy high-speed performance.

Diesels still need regular maintenance to keep them running. You have to change the oil and the air, oil, and fuel filters.

If you neglect the maintenance and the fuel injection system breaks down, you may have to pay a diesel mechanic more money to get things fixed than you would to repair a gasoline system because diesel engines are more technologically advanced.