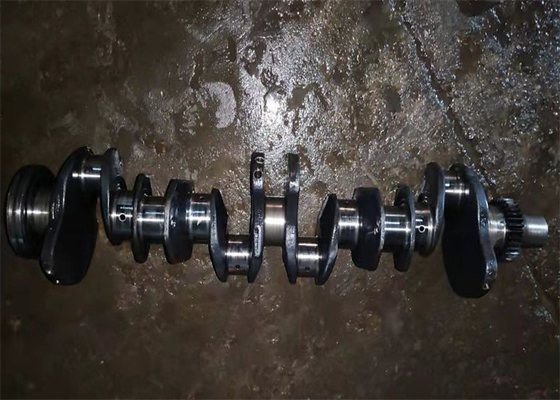 What are the parts of a crankshaft?

The crankshaft is the main rotating component of an engine and is commonly made of ductile iron. Features of a crankshaft include the crankpin journal, throw, bearing journals, counterweights, crankgear, and a power take-off.

What are materials used for crankshaft in excavator engine?

Crankshafts are made from forged steel or cast iron. Crankshafts for high-volume, low-load production vehicles are generally constructed from nodular cast iron, which has high strength. Fuel-efficient engines require a high power-to-displacement ratio, which has increased the use of forged crankshafts.

How a crankshaft is manufactured?

The function of the crankshaft in engine?

The engine torque is not continuous because it’s produced only when each piston is on expansion cycle. Due to this a flywheel is mounted onto the crankshaft in order to smooth the engine torque and reduce vibrations.

On V-type engine on the same conrod journals, two connecting rods are mounted. Because of this arrangement, a V-engine, for the same number of cylinder, is more compact than a straight engine.

Two types of crankshaft are produced, cast and forged. The counterweights can be also forged directly onto the crankshaft or bolted-on (fixed with threaded bolts).

All the pistons of the internal combustion engine are transmitting their forces to the crankshaft. From the mechanical point of view, the crankshaft has to withstand high torsional forces, bending forces, pressures and vibrations.

For any questions or observations regarding this tutorial please use the comment form below.