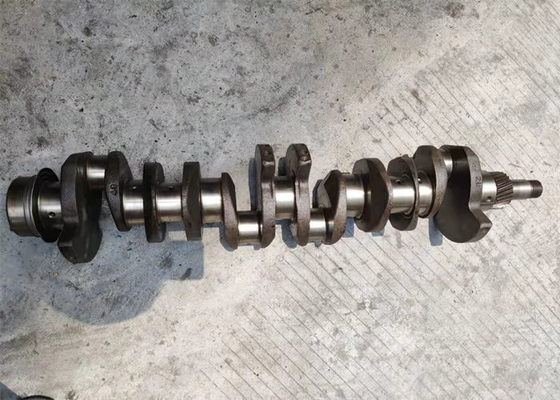 The steel alloys commonly used in high-strength crankshafts have been chosen in what each designer considers to be the most desirable combination of properties. The nominal chemistry of crankshaft alloys discussed here. Medium-carbon steel alloys are composed primarily of the element iron & contain smalls percentages of carbons 0.25% to 0.45%, describes as “25 to 45 point” of carbons, several A combination of alloying elements, a mixture of which has been carefully designed to produce specific properties in the target alloy, including hardness, surface, and core hardness, ultimate tensile strength, yield strength, endurance limit fatigue strength, ductility, impact resistance, corrosion resistance, temper-inflammatory resistance.

Commonly used alloying elements in these carbon steels are manganese, chromium, molybdenum, nickel, silicon, cobalt, vanadium, and sometimes aluminum and titanium. Each of those elements adds specific properties to a given material. The carbon contents are the main determinant of the ultimate strength & hardness to which such alloys can be heat treated.

The crankshaft is an essential part of the engine responsible for converting reciprocating to rotational motions. In a simple language, it is a shaft with a series of crank and crank pins, which are attached to the connecting rod of the engine. Nowadays the large engines have multi-cylinders and the crankshaft is necessary to drive the pistons.

You cannot find such mechanism in single cylinder engines as they have an only single piston in it. These parts are made with the forging processes and need careful designing to reduce the effect of vibrations.

How to use the crankshaft in engine?

Now diesel engines of whatever type, and whether water-cooled or air-cooled, had fixed cylinders and a revolving crankshaft.

The piston rod transmits the power to the crankshaft, a long rotating piece of steel.

Cast-iron pistons are used, and are connected to the crankshaft in the same manner as with the Gnome and Le Rhone engines.

The crankshaft carried a pinion gearing with an internally toothed wheel on the transmission shaft which carried the air-screw.

What are the functions of a crankshaft?

A crankshaft is one of the most important parts of an internal combustion engine. The basic function of a crankshaft is to convert the linear motion of a piston in rotary motion.The crankshaft converts reciprocative motion to rotational motion. It contains counter weights to smoothen the engine revolutions. There are two types of crankshaft, the monolithic type, used for multi-cylinder engines, and the assembled type fabricated from separate elements, which is mainly used for motorcycles.